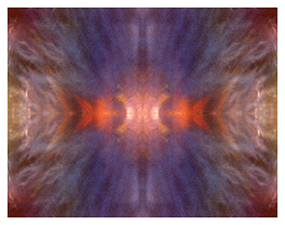 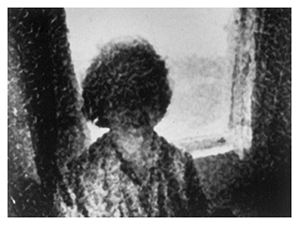 In several interviews, Patricia has discussed the techniques she developed in creating her unique impressionist photo art.  We invite you to listen to two of those interviews:

In this interview recorded in 2002, Patricia and John Montone discuss the artistic process as it relates to legal blindness and how that process influenced a work she titled, “Sunset In Riverside Park” [shown above left].

In this 2006 interview, Patricia and Karen Ingenthron Lewis (and the first person to call Patricia’s work “photo–art”) hold an in depth discussion on the artistic process as it relates to legal blindness, and they discuss several of Patricia’s works, including: “Sophia” [shown above right], “Man in Bookstore”, “Snow Sculpture”, and six of the note–cards from Patricia’s collection.

“I found [Patricia Youngquist’s] photographs to be really interesting and riveting. . . . [‘Sophia’] looks sort of impressionistic, as if she’s been made out of big globs of oil paint.”
— Karen Ingentron Lewis